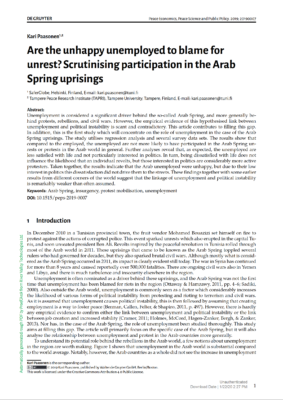 Unemployment is considered a significant driver behind the so-called Arab Spring, and more generally behind protests, rebellions, and civil wars. However, the empirical evidence of this hypothesised link between unemployment and political instability is scant and contradictory. This article contributes to filling this gap. In addition, this is the first study which will concentrate on the role of unemployment in the case of the Arab Spring uprisings. The study utilises regression analysis and several survey data sets.

The results show that compared to the employed, the unemployed are not more likely to have participated in the Arab Spring unrests or protests in the Arab world in general. Further analyses reveal that, as expected, the unemployed are less satisfied with life and not particularly interested in politics. In turn, being dissatisfied with life does not influence the likelihood that an individual revolts, but those interested in politics are considerably more active protesters.

Taken together, the results indicate that the Arab unemployed were unhappy, but due to their low interest in politics this dissatisfaction did not drive them to the streets. These findings together with some earlier results from different corners of the world suggest that the linkage of unemployment and political instability is remarkably weaker than often assumed.

You can read the publication here.