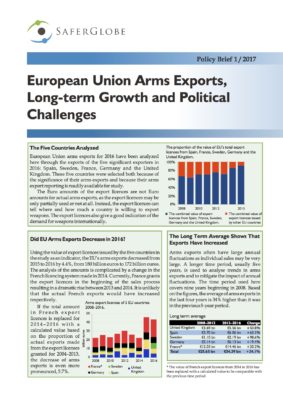 The long-term average shows that arms exports of the EU have increased in 2016. This observation is based on data from five major EU arms exporters. These five countries under scrutiny are Spain, Sweden, France, Germany and United Kingdom. The most significant destination countries in 2016 were United Arab Emirates, Saudi Arabia, and India. During 2016 Saudi Arabia and Turkey were especially subject to foreign policy consideration. Arms export licences to Saudi Arabia and Turkey were also denied.

You can read the publication here.